In cooperation with the Secretariat for transport of city of Belgrade, we inform you about the temporary and permanent traffic regime changes in some streets and areas of the city.

Information about establishing a seasonal bus line no. 400 (VOŽDOVAC – TOP OF AVALA)

As every year, starting with work a seasonal bus line no. 400 (Voždovac – Top of Avala), allowing users of public transportation to visit one of the most popular Belgrade picnic place on holidays and weekends, with direct line of public transport. The line will use the terminals “Voždovac” and “Top of Avala”.

The route of the line in the direction A: VOŽDOVAC – Bebelova st. – Baštovanska st. – Paunova st. – Bulevar oslobodjenja – The road to Avala – The road for the top of Avala – TOP OF AVALA.

The route of the line in the direction B: TOP OF AVALA – The road for the top of Avala – The road to Avala – Bulevar Oslobodjenja – Paunova st. – Crnotravska st. – Save Maškovića st. – VOŽDOVAC

On the line will run two buses on Saturdays, Sundays and public holidays during the period from 8:00 to 19:30 pm, with interval of 40 minutes.

Closing for traffic the section of  Surčinski put street

Pupin bridge – a new route for trucks in transit 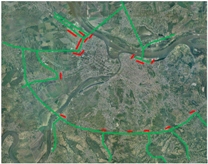 By opening the Pupin bridge to traffic not just get a connection between Zemun and Borca, but frees urban core of trucks. Until now, the only link between the right and left Belgrade’s sides of the Danube was Pančevo bridge, and as such was overloaded with passenger vehicles and trucks in transit. By connecting Borca and Zemun trucks in transit, which have so far used the streets: Savska, Karadjordjeva, Bulevar vojvode Bojovića, Mije Kovačevića, Ruzveltova, Dimitrija Tucovića, Batutova, Bulevar kralja Aleksandra, Gospodara Vučića, Vojislava Ilića and Vladimira Tomanovića as the only connection with Pančevo and Zrenjanin side of the Danube, will be able to reach their target destination, moving out of the city center. In fact, now all routes of entry into the city from Smederevo, Niš, Kragujevac, Čačak, Obrenovac, Novi Sad and Šid connected with Zrenjanin and Pančevo, and all transit movements will be relocated from the narrow city zone.

We inform drivers of vehicles in transit that, as before, using a Circular road and the Belgrade Bypass will be connected all routes from Smederevo (u Leštanima), Niš (highway near Bubanj Potok), Kragujevac, Čačak (at Orlovača), Obrenovac (near Ostružnica), from Novi Sad and Šid (the loop Dobanovci), and over the Pupin bridge with Zrenjanin, Pančevo and Vršac and this is mandatory transit route for commercial vehicles, which can be used 24 hours.

Access to content in Danube Street and the Port of Belgrade is only allowed from the Pančevo bridge to the Francuska street and back, it is not possible to continue moving freight vehicles to the Boulevard of vojvoda Bojović, or Karađorđeva and Savska street.